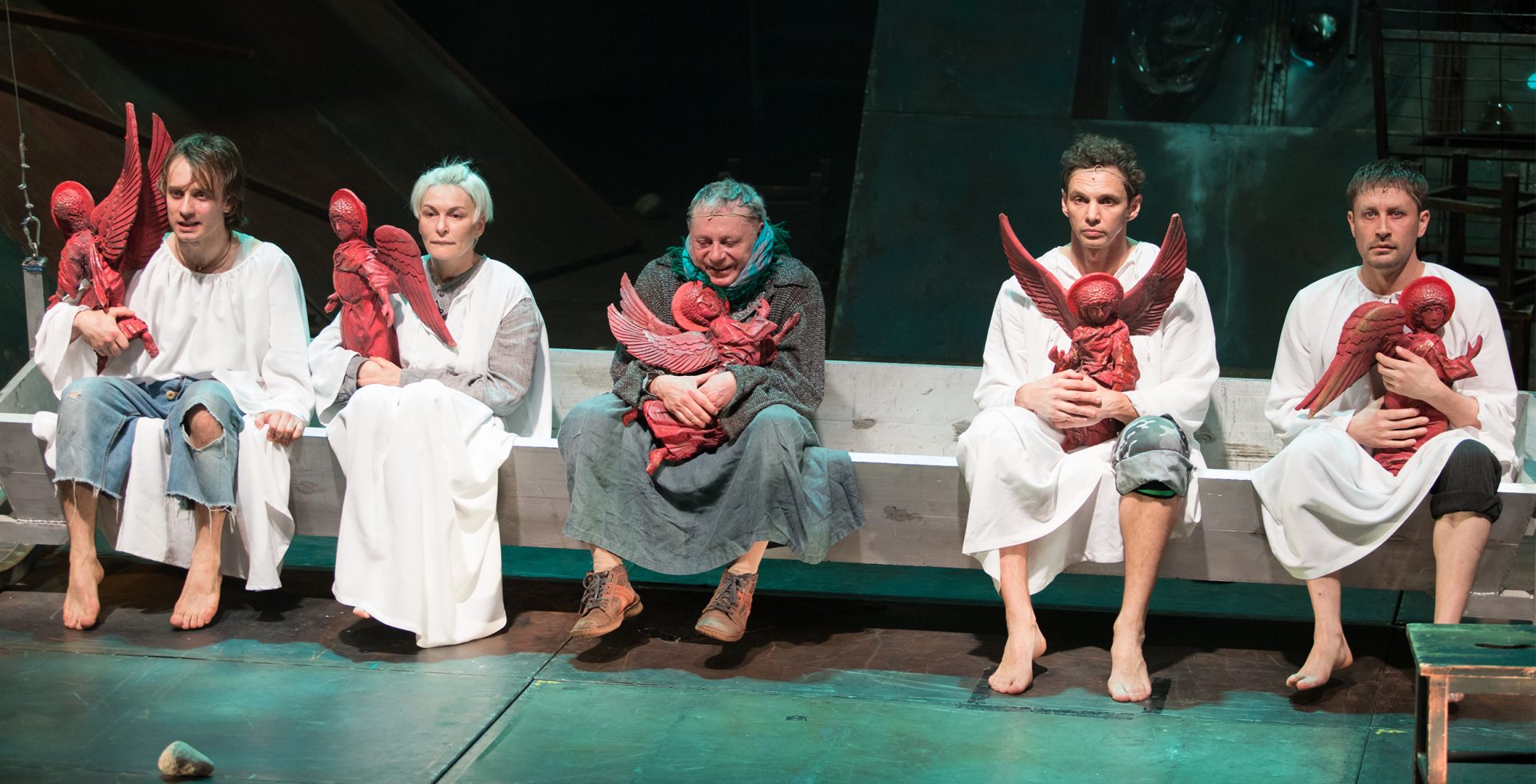 At the Beginning and the End of Time stands out among the works of Roman Viktyuk. It is based on a new Ukrainian work by Pavlo Arie and is Viktyuk’s theatrical tribute to his homeland. The play is a story of a family living in isolation in the restricted area or the ‘exclusion zone’ in Chernobyl, following the 1986 nuclear disaster. Although no people are allowed there, this family refused to leave their home. This main plot indeed takes from true events: after the accident, everyone was forced out from the original exclusion zone – an area within 30 km radius of the power plant that has since been enlarged . However, about 300 people refused to leave and continue to live in the highly radioactive overgrown forests with affected plants and wildlife. According to the official estimates, it will not be safe for humans to inhabit the Chernobyl area for another 20,000 years.

That said, beyond the main plotline, neither the play nor the performance resemble a documentary. The life of these characters is a fantastical existence and Roman Viktyuk staged is as a parable about the desperate desire to live and love.

At the Beginning and the End of Time was included in 2016 Russian Case programme of the Golden Mask Theatre Festival. According to its curator, Pavel Rudnev, director Roman Viktyuk tells a story of a “hidden, secret resource of humanity, that lives in humans and reveals itself in extreme situations”. It is a hymn to “paradoxical, incomprehensible, irrational will to survive”, love and humanism.

Roman Viktyuk has staged a play by a Ukrainian playwright who is a resident of Germany. The play tells about people living in an exclusion zone in Polesye near the Pripyat river years after the Chernobyl disaster. They rather prefer to have no social contacts whatsoever than deal with civilization in any way. In fact, the play deals with life in the post-Soviet area, presenting the drama of people living in territories that are fragments of the former empire. Once again the post-Soviet territory becomes a place of potential explosion, hallucinations and loss of connections between people. The former Soviet civilization has become history, the concept of human life has lost its value, time has stopped and connections between people have been destroyed completely. Those who continue living in the Chernobyl area turn out to be animals trapped by the mighty ones. They have already given away everything, but the world is still hankering for more human sacrifices. The urban civilization continues to live following the hecatomb. It is absolutely impossible to escape the civilization that devours people even if you take the path of self-destruction.

One of the most intriguing figures of Russian theatre Roman Victyuk, who we always expect a fervent carnival of, with feathers, half-naked bodies and talks of sex, has decided to celebrate his birthday with a production about Ukraine. At the heart of the show is a play by a German emigrant Pavlo Arie (a completely new name in playwriting) about the Chernobyl catastrophe. The author’s subtitle printed on the playbill states: “Devoted to hundreds of people challenging the terrible catastrophe, the state system, to patriots of their native land who have come back home, the last inheritors of Ukraniain woodlands”.

This play is terrible and beautiful, simple and accurate; it’s full of faith, hope and love.  It’s beautiful, not because they show beautiful things on stage: there are no smooth movements, graceful fading, and beautiful bodies as a metaphor of beauty and love of the world.  There is stinking, radiating mysterious mist, – the roadside picnic – invented by the creators, impossible on earth – real life. One must get the food, one must protect the loved ones, one must love and live.